The UK Ministry of Justice recently announced that it would start a pilot to enable people to have their tax appeals heard via video hearings saving travel time and money and improving access to justice for people with health problems. This is a welcome step towards promoting the rule of law and increasing access to justice in a technologically advanced world. However, for much of the world, this step would be beyond their reach as they grapple with barriers to access to justice and the rule of law made worse by scarce resources and the lack of up to date law books.

One charity seeking to address this problem is the International Law Book Facility (‘ILBF’). Recognising that UK law is compatible with the law in many jurisdictions and provides useful comparisons for precedent and formulating new legislation, the ILBF’s goal is to equip students, lawyers and judges with resources to help the rule of law flourish and support access to justice for all, thereby contributing to the peaceful and democratic development of their countries.

The ILBF was launched in 2005 and has shipped 51,000 used legal books to 180 organisations in 50 countries. Some of these include the University of East Africa in Uganda, which received 530 books; the Ministry of Justice in Malawi; the African Prisons Project law programme which enables prisoners in East Africa to pursue a legal education; the Office of the Ombudsman in Sierra Leone; Kathmandu University in Nepal and the Supreme Court of the Federated States of Micronesia. 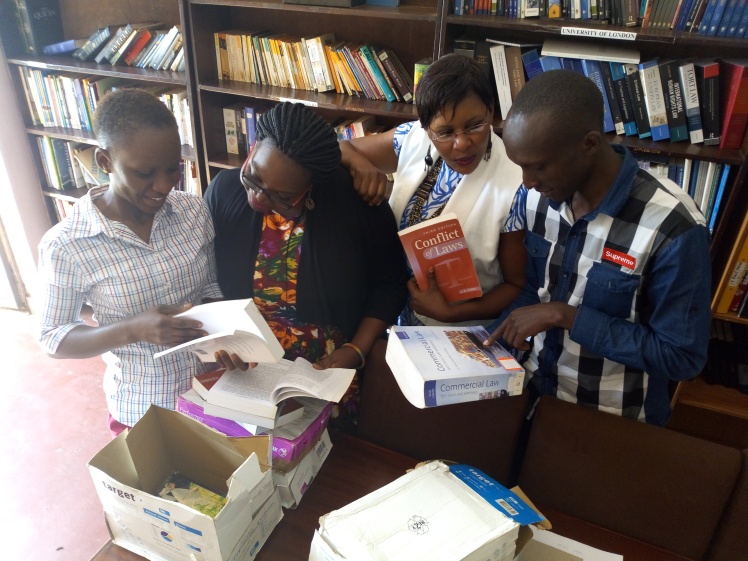 The books, donated from across the UK legal profession are sorted to identify the texts that will be most relevant and only those requested by the organisations who apply, via the ILBF’s website, are sent. The impact of the ILBF’s work was documented in a video made for its 10 year anniversary in 2015 which can be viewed here. From assistance with the revising and drafting of laws, to improving the pass rate of law students, to providing research and reference materials for state advocates, the books are said to be making a big difference.

The plan for the next ten years and beyond is to continue to reach more organisations across the globe in need of legal texts. There are many parts of the world to which the ILBF has not yet shipped, so the patrons, trustees and operating committee are actively involved in outreach.

The ILBF is also developing partnerships with other organisations who support the rule of law; for example, organisations involved in judicial training where the ILBF can follow on after the training and provide books to strengthen resources.

Those interested in getting involved with the ILBF can do so in a number of ways such as: assisting with book collections; raising awareness of the work of the ILBF through social media; helping with administration and good governance; assisting with packing days when books requested by the organisations are identified, stamped and packed; preparing the packed books for shipment; and following-up with the ILBF’s recipients. To contact the ILBF about volunteering, funding or donating books, please get in touch here.

The ILBF is just one example of a UK based organisation helping to promote the rule of law and access to justice across the world by taking advantage of the strength and reliability of UK law across the globe. This blog will routinely feature other similar organisations.